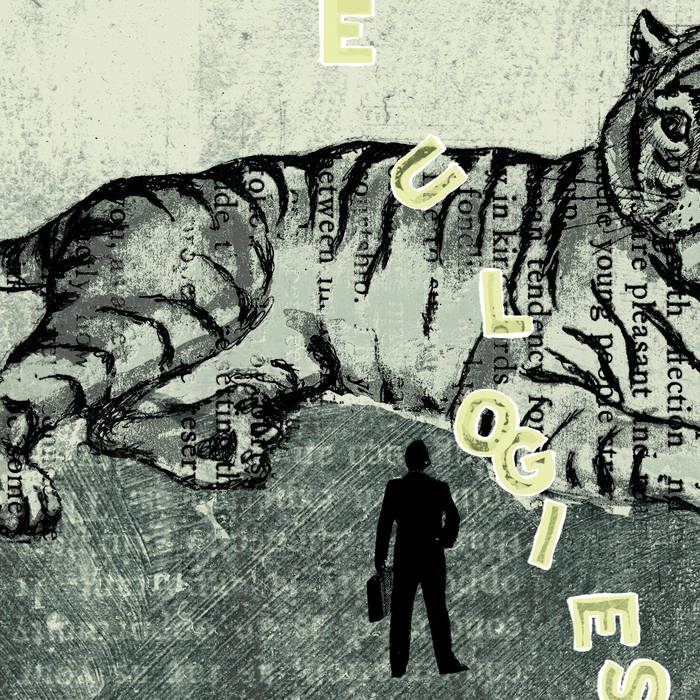 Storytelling is a universal human instinct. Biographies of the recently deceased are the saddest form of storytelling that most people will ever know. People are remarkably good at it. Even those prone to shyness or believing themselves mealy-mouthed find they can get their lips to move well enough to describe a few snapshots from the life of the dead.
“Eulogies are most commonly designated for those who have passed, but really they are just words of praise, and in this case they are for the living,” explains musician Peter Walker.” “The name, for me, represents the saying of the unsaid, the voicing of the unexpressed, to someone you care about.”

Albums, like the various camera angles of the funeral eulogy, are like scenes of a movie. They are the writer’s chance to tell a story ten times over, from ten different angles, to ten different melodies. Abundant is the creation and deferment of hope; innumerable questions of what keeps lovers apart; what keeps him from getting it together; why she screws up every time. A resourceful writer will rise and strike down hope constantly, put people out of love and into the acrid glare of lost trust a couple times; confess a dozen of his own sins while hiding behind the writer’s mask; take revenge on enemies, and so on. All the while, touching the brush to the canvas – as the pointillist does with stabs of color – dotting guitar chords, barroom piano hits, pump organ swells.

Eulogies’ Walker does just this on the band’s debut self-titled collection. With his voice dipped in reverb, he gently reminds us of the pre-histrionic honesty of Elvis at Sun Studios. With Chris Reynolds’ drums pulsating at his back, Tim Hutton’s typewriter-like bass notes keeping things uncomplicated, Walker lays out his 13 scenes.

Originating as a solo outfit in 2004, Walker’s time on the road readied him for the next step in his natural progression – a band.

While it’s been said a single artist is fine, a group has genius. This is true of athletes and certainly of musicians. Eulogies, the band, was formed on the road, bombing around America in a late-model maroon Dodge van, supporting Starsailor in the summer and fall of 2006.

On that tour, Walker, then still a single artist, united together with his backing musicians over the course of 30 shows in 40 days. They developed that unspoken musical trust that all great rock and roll bands must have. They became a band (the group, with its potential of genius) in any one of a hundred truck stops, dozens of late nights in motel rooms, in between telephone busy signals and botched driving directions, at countless sound checks and in banal dressing rooms.

For Walker, the metamorphosis was effortless. “It kind of happened without knowing it,” he explains. “Touring under Peter Walker brought us together as a band, and we all realized that the sound we were making was very cooperative. We found ourselves with an album’s worth of songs that were ready to be recorded as a band.”

Upon returning to their hometown Los Angeles, they mixed together a group of chiseled songs only these three could sink into so easily. The album, laid down at the direction of Walker and co-producer Hrishikesh Hirway [The One AM Radio], and mixed by John Goodmanson, an intimate of Sleater-Kinney and Blonde Redhead, will be released September 11 on Dangerbird Records.

As in his previous recordings, Walker’s new compositions, while not noticeably somber musically, are imbued with an underlying darkness. Yet this darkness for him is illuminated as the music is created, whether in studio or on stage.

“The themes may be dark, but the end result for me – the process – is very bright,” he reveals. “What I like about dark themes is that they open people’s hearts to important things in life, like struggle and communication.”

The mood set throughout can be easily detected in “Can’t Relate,” as Walker intones, “We’re all swimming in the bottles of our own accord” or the song “Useless Amends,” a title that speaks volumes. Walker’s favorite, “Under The Knife,” allows for a glimpse into a possible confession with lyrics like, “I’m scared to love what death can touch.”

The aforementioned track is a stand-out, with Walker pointing out, “It encapsulates the record for me in its simplicity and sounds.” The bass-driven melody leads into Walker’s recurring rasp singing “I deny, deny, deny.” He summarizes, “It starts with Chris’ huge Slingerland kick drum, drawing in Tim’s melodic bass line and my chugging guitar. For me, that’s the band.”

Produced by Peter Walker and Hrishikesh Hirway.
Recorded by Mike Creswell at Sunset Sound in Hollywood.
Mixed by John Goodmanson at Robert Lang Studios in Seattle.
Mastered by Dave Cooley at Elysian Masters in Echo Park.