Tempted To Do Nothing 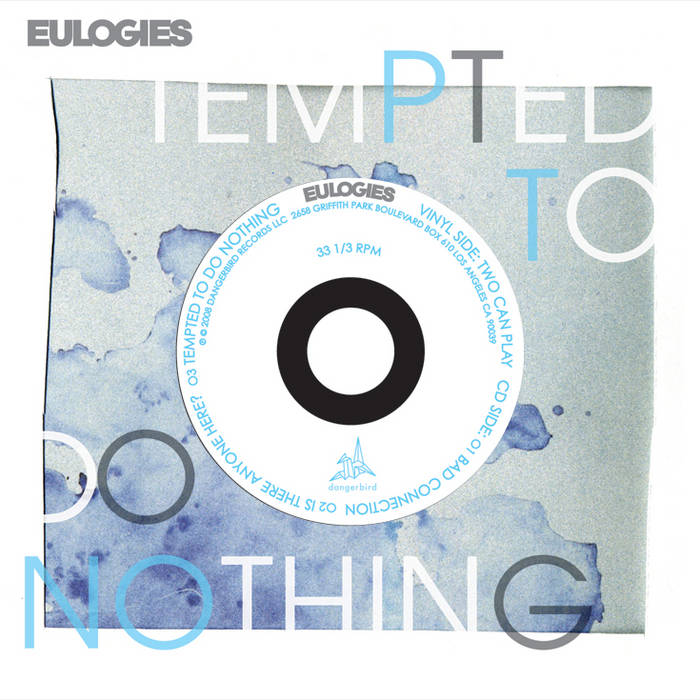 Feelings are easy. Abstract and ethereal, but they’re as natural as being alive – intuition’s second cousin. Giving those feelings a concrete voice, then, is the real fight. We’re all so very human. We possess a never-ending capacity for love, but we get nervous, we get lazy, we take each other for granted. We save sentiments for some other time. By then maybe it’s too late—maybe the object of your emotion has left your life for good.

“Eulogies for me is not about talking about someone who’s dead,” says Eulogies bandleader Peter Walker. “It’s saying those things that someone would say only at that moment but wish they had said right now. That’s what I’m preaching to myself— don’t be quiet. I can’t survive down that road.”

On October 7th, Dangerbird will release Eulogies’ four-song EP entitled Tempted To Do Nothing, which will be followed by their upcoming full-length album, Here Anonymous, due out Spring 2009. The music on both releases imparts an intimacy of emotion that’s normally all too easy to shy away from. Everyone who’s ever loved anyone knows the process isn’t easy, but it is necessary. Eulogies’ songs struggle with broken-down communication, the weight of bad habits, the fear of being alone. That struggle is universal, and it’s presented within the music with a directness that’s both stark and beautiful.

“I think self-limitation is such a great thing,” Walker says. “It lets you dig in a little bit more instead of changing things for every mood or song. It forces you to manipulate what you have in your hand rather than try to grab at something else.”

With Chris Reynolds on drums, Tim Hutton on bass, plus Walker on guitar and vocals, Eulogies renders vivid scenes with a minimalist palette. Written during a Fall 2007 U.S. tour with Film School, the songs on Here Anonymous are deceivingly simple. Riding warm, well-worn instrumental tones and Walker’s patient, understated vocals, they build a consistent mood over the album’s 12 songs.

“We’re not just going in and recording an A-side and a B-side,” Walker explains. “I love to put a record on and that’s the feeling I’m gonna get for 40 minutes. But it’s gotta be exciting, too.”

To that end, Walker shifts tempos and instrumentation and brings along the occasional guest. “Two Can Play” opens with a gorgeous, dreamy groove, and soon Walker and Nikki Monninger of Dangerbird bandmates Silversun Pickups are finishing each other’s soft-sung verses. The haunting organ sound on “Stranger Calliope” was achieved via a Casiotone keyboard layered over a live flautist. Songs build momentum from one to the next with meticulous track sequencing; drama is evoked not through volume or intensity but subtle counterpoints in composition. There’s a gentle, knowing tension to the music that speaks to the bittersweet push and pull of everyday living and dying.

“I see a lot of these songs as being really positive,” Walker says. “Instead of ‘Woe is me,’ I’m lifting myself up and I’m trying to share that a little bit. In general the subject-matter can be dark, talking about loss or being alone, but really it’s all optimistic.”

The result is melancholy music that’s upbeat, a record of specific personal intent that speaks to us all. Eulogies offers catharsis; a musical tradition that’s ageless and inviolate. Here Anonymous snatches a moment out of that continuum for us to share, here and now.